When we walk down the mountain, the next morning, we actually see the slopes of the volcano close-up. Lava flows have come cascading down before solidifying whilst still furiously splashing, leaving an undulated, wavy surface. Fabulous structures have developed along the slope as part of the cooling process. It is just a pain to walk on the irregular surface, give me sandstone anytime (incidentally, give me sandstone, too, when it comes to sitting down: our trousers suffered badly from the occasional rest on the sharp tuffs). 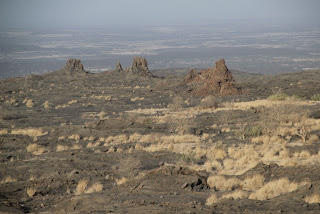 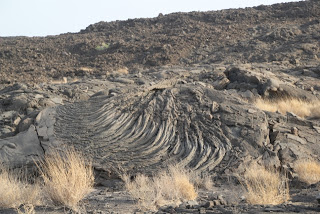 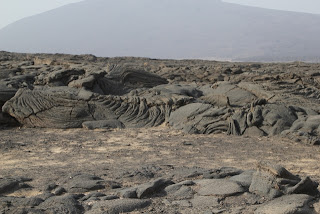 (1, 2, 3) the side of the volcano in day-light, with numerous solidified lava structures 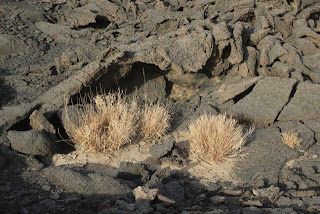 (4) wherever there is a little sand, grass manages to grow, incredible!


So this is where we have been the evening before, walking up, in the dark – well, by torch light, but not seeing much beyond our own feet. A strenuous 3.5 hour climb, not so much because of the climb, which was not very steep, but more because of the heat, despite the sun having gone down already. Pretty exhausting, perhaps we are less fit than we would like to think. But we got rewarded! Still some two hours away, we could already see the glare from the volcano, and when we come closer, we see the steam, we smell the sulphur. After having caught our breath again, we climbed down the crater rim. Erta Ale has two craters, one inside the other, and the outer one is made up of fibrous, once again undulating, lava, or whatever this particular stuff is called. Sometimes solid, but at other moments the rock crushes under our shoes, collapses, making us drop down. Never more than 10-20 cm, but it is an eerie feeling, especially because it is pretty dark everywhere: you could imagine yourself being swallowed by the volcano, if lower layers are equally weak. Getting closer to the rim of the inner caldera, you glimpse where you could end up: in purgatory, occasionally changing to hell when a burst of molten lava explodes upwards. Below – perhaps 50 to 100 meters down, difficult to estimate -, the inner caldera is entirely liquid: although parts of the lava lake seem dark, we can see the surface moving in angry waves, as if a bad storm blows over the lake. Some cracks in the dark surface allow a view of what is going on below the surface, and in case your imagination is insufficient, fountains of yellow and red-hot lava splash up along the rim at times, the glowing fluid clearly sticking to the rock afterwards. I have seen volcanoes before, and I have looked over crater rims before, but this, I have never seen.


The guides are a little nervous when we come to close to the edge, and the surface is indeed pretty hot – although I think they are more concerned about pieces of the rim breaking off and falling down, taking us with them. Into purgatory, into hell. 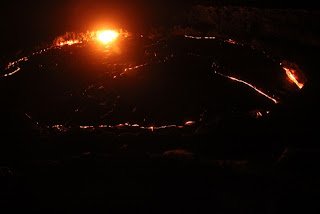 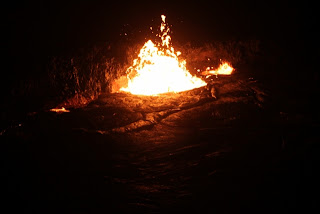 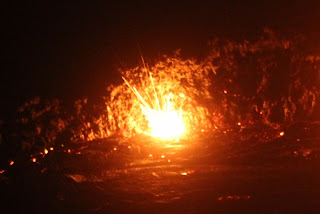 
Of course I need to see this in daylight too, so where most other tourists descent at dawn, to avoid the heat of the day, I have to get back into the outer crater, at first light. The softish rock we were walking on last night is silvery coloured, and once again, solidified in beautiful patterns.  And wherever there is a strong sulphur smell – much stronger now than earlier, and almost suffocating in some areas – yellow threads, fibres, are attached to the rock. I don’t know how this process works, but it is fascinating, seeing this web of sulphur covering the rock.


The crater is as active as the night before, and as impressive, although in daylight it is actually much smaller than we had anticipated. The contrasting glows are less pronounced, but you still get a pretty good idea of what is going on, down there. 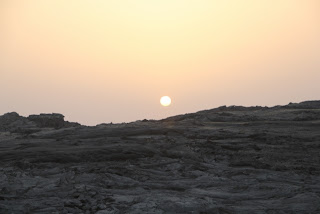 (8) a watery sunrise over the crater 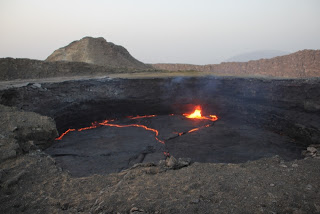 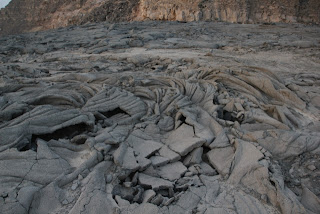 (10) this is the stuff we walked on, an crashed through, during the night 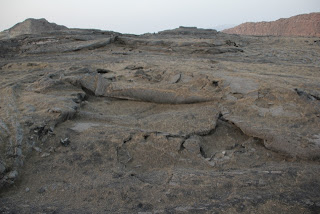 (11) and this is the yellow sulphur web that forms across the rocks where vents expulse sulphur, something you can clearly smell
We start walking down the volcano much too late, and it takes us almost three hours to reach the camp where the cars are parked. Partly because of the amazing geology on the way, the fantastic structures in the solidified lava. Partly because of the uncomfortable surface, of course. Partly because the camel that had brought our stuff up the night before had decided to leave, together with another group, earlier in the morning, leaving our camel man at a loss, and us with lots of equipment to carry down between the seven of us. But mostly, because by 9 am it is already searing hot on the slopes. And there is nothing around, just back rock. No shade, no shade whatsoever. We have now been three days in the Danakil Depression, two more to go, but we are already thinking of our well-deserved – at least, that’s what we think – comfortable hotel room at the end of it. I cannot even begin to think what it must be like for the people who live here, with very little water - and forget about cold water -, with no shade; with the permanent heat of the Danakil Depression around them day and night for the rest of their lives, and that of their children. Until the road to Mekele is finished, perhaps. That road up the Erta Ale, that I mentioned earlier, I am afraid that will still take some time: this remains, after all, some of the most inhospitable countryside in the world. 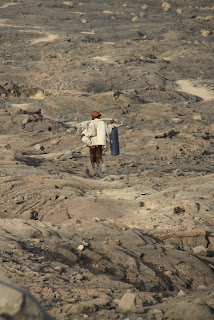 (12) camel man on the way down, looking for his camel 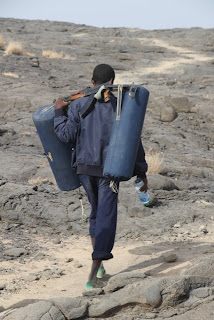 (13) and one of our police escort, demonstrating yet another use for a Kalashnikov, as a carrying stick

Newer Post Older Post Home
Subscribe to: Post Comments (Atom)
There is much more about our travels on the site www.theonearmedcrab.com, which will take you into Indochina (Laos, Cambodia and Vietnam), Argentina, Lebanon, China, India, Indonesia and much more. Have a look!

BRUNO
After an international career of some 25 years, I decided to retire some time ago in order to pursue my interests that do not easily align with a full time job: traveling, and writing about it, plus a bit of photography (and a whole range of other things, irrelevant for this blog). My first “travel” was in fact a return to work, in Haiti, but since then we managed to roam around in NW Argentina, Indochina and Lebanon, as well as the occasional short trip to our backyard in Europe. The latest undertaking is in the Horn of Africa.